“Watching the yellow shadows melt” creates a dwelling and education center for a hickory nut forager. It gets its name from a Carl Sandburg poem, “Shagbark Hickory,” that describes a moment below a hickory tree as the sun begins to set. Within the project, which is purposefully surrounded by a planted grove of hickory, this moment is recreated by the surrounding forest casting shadows on the warm-toned limestone. A modular form controls space, while floor-to-ceiling windows create the feeling of being surrounded by the forest, letting light and shadows from the outside intermingle in the interior space. The module, one rectangular prism, as seen in the axonometric view and the models, was generated by abstracting the section of a hickory nut, by pushing, pulling, and removing these modules, large social spaces like the exterior courtyard and small areas of solitude are simultaneously created in the voids. “Watching the yellow shadows melt” also makes the multiple uses of the hickory nut a repeated motif throughout the building. Hickory wood is known for being high quality and strong, so it makes up the floors. Additionally, hickory wood or shells collected from the forest floor can run the wood oven and fire pit in the courtyard, which can then be used to cook the nuts. The educational space on the second floor brings visitors to eye level with the hickory trees around them, and the attached courtyard allows them to experience the environment in which the trees thrive. The lower floor is dominated by storage and preparation space to make processing the collected nuts more accessible. On the south side of the building, the forager has their private dwelling that lets in plenty of light and connects to the surrounding forest. 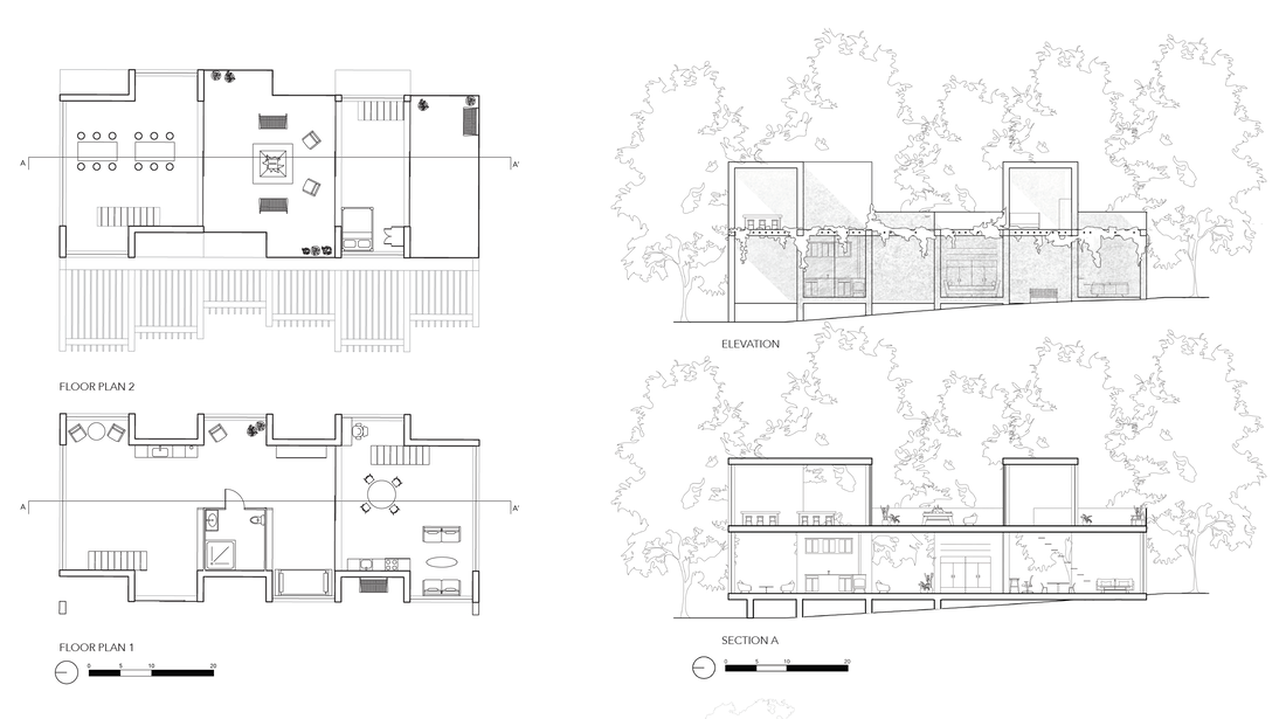 This merging of private and guest spheres is a repeated concept in this apartment, leading to complex and sometimes awkward interactions. As seen in both the section and the elongated elevation, although there are a mere few inches between the desk space and the rest of the living room, they are entirely different worlds. The desk area serves as a private office that is a place of solitude and focus, whereas the couch area invites in guests and is a loud social space. Similar contradictions exist throughout the apartment; the most obvious is that guests must enter the bathroom through the bedroom. When people are occupying the apartment, someone will inevitably need to use the bathroom, making the bedroom – one of the most private rooms in a living space – a guest space. Like the desk in the living room, it creates tension and awkwardness between private and public.

May 2021
Spatial Negotiations focusses on the ideas of elongation, mirroring, and the contrast between open and closed space. It is also based on the accumulation of concepts and design features from The Constructed Field and The Prosaic Object. The large volumes, planes, and supports from the vertical structure are elongated and mirrored onto the ground. This distortion is further emphasized with contrasting materials. On the vertical sides there are large concrete blocks, and on the ground thin concrete wood prints exaggerate the long, narrow pathways. This mirroring and elongation, inspired by the distortion created by water is reaffirmed by the main water feature that continues to reflect back onto the project. It serves to bring attention to the main angle that accelerates interest up and around the space created by the vertical structure. It also creates a unique experience on the interior by adding to the already cooler and more intimate atmosphere. It is in this area that the contrast between open and enclosed space begins to be established. The ground level of the structure is enclosed by pathways on the ground level that are highly controlled with walls on every side, and as someone ascends the enclosure begins to evaporate. The middle floor being slightly less enclosed, and the top floor having few obstructions. Even the one side that is covered a large volume, is hollowed out and contains a glass elevator that allows for views to the outside. Much like the Prosaic object, Spatial Negotiations is based on the idea of alluding to what is hidden behind volumes and planes without complete transparency. This is to develop continued interest in the hidden forms. The top of the structure is a bright, open space that looks out over the entire neighborhood, in direct opposition to the atmosphere of the ground level. 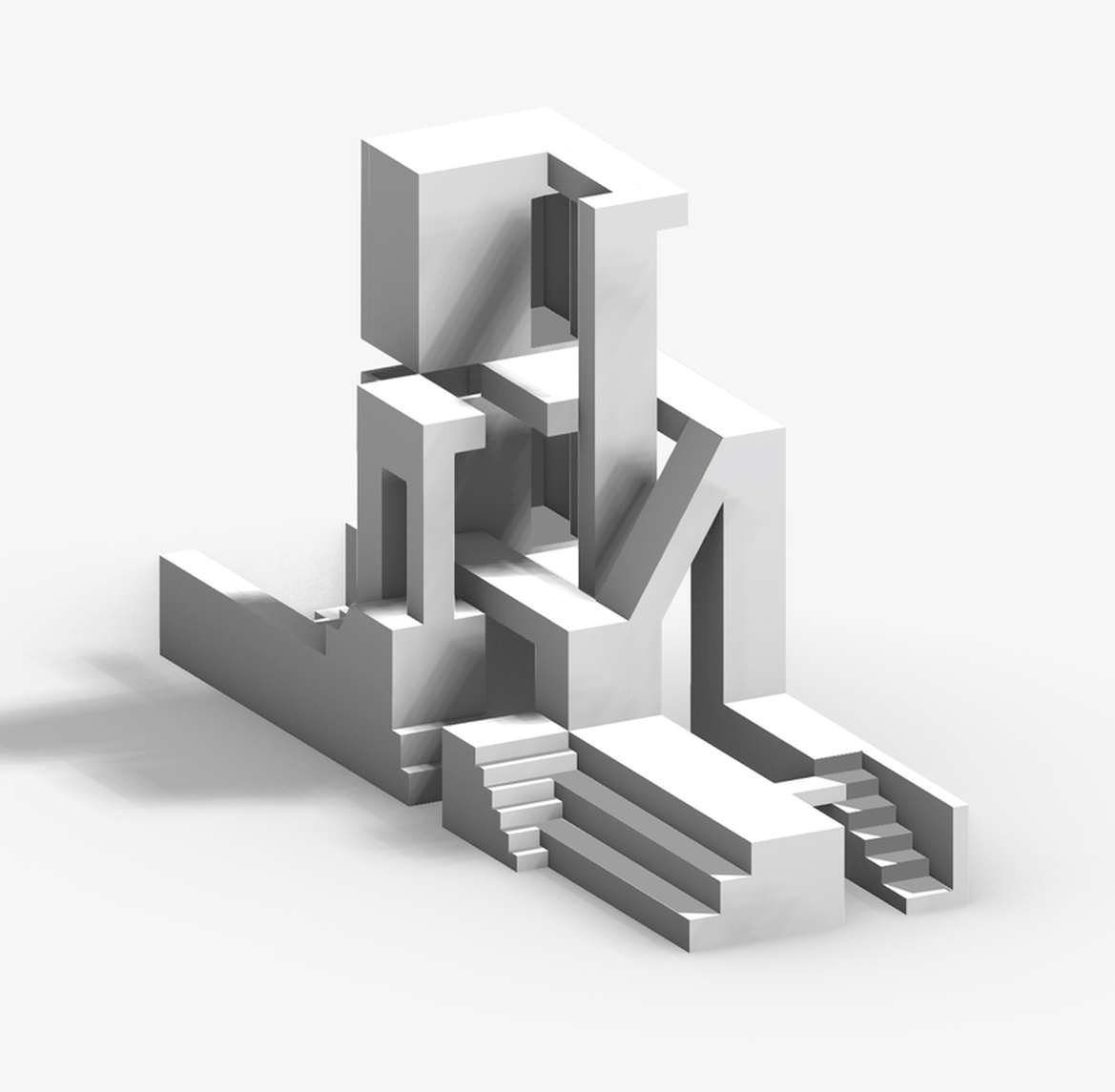 April 2021
​This project was based on the bowline knot, which deals with many of the project’s underlying concepts because its purpose is to enclose, and it is both constant and flexible by not slipping or binding. To transition to 3D, it was vital to redistribute theproportions to balance the piece and add complexity. When creating a mass, enclosed spaces encourage the viewer to move around the object. The large plains and volumes, even on the bottom, reveal aspects of the interior space by allowing them to cut through to the exterior. These voids draw the eye to the central angle, which causes a pause, but then a reacceleration around the object. The inverse also uses a simple exterior that entices the viewer to want to explore interior spaces. The inside of the object creates a series of connected pathways. Additionally, the model shows how the original object’s voids are unified and play between small and large scale, gaining openness moving vertically.
The system used to inform this project is based on a simple pattern from one through five. By repeating lines of different lengths, and then using this to select lines to build off of, it creates a very organized framework. The drawing is a looser interpretation of the system and relies on earlier iterations. A pattern is formed by established trends and then is repeated to create new areas of emphasis. In the extruded model the logic regulates rotations that keep the form interesting and make it appear unpredictable. Finally, in the layered model, the principles are developed to determine the base and to create an increasingly controlled and enclosed space as the elements move into the layers. Then, the same framing effect from the line drawing reemphasizes particular areas. By setting up a clear logic, the assignments rely more on intuition as they progressed.